The Institute of Chartered Accountants of Pakistan (ICAP) in collaboration with Unilever Pakistan held the 2nd “National Finance Olympiad - 2016”. The Grand Finale was held on November 28, 2016 at a local hotel in Karachi. 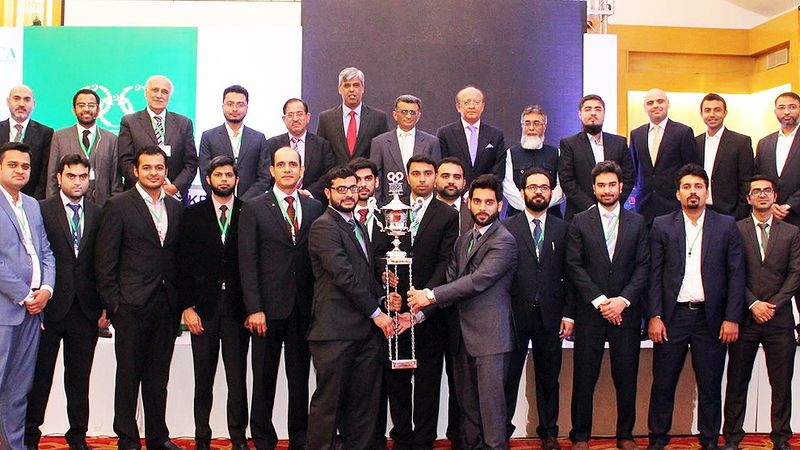 The day commenced with recitation of a few verses from the Holy Quran followed by opening remarks by Mr. Khalilullah Sheikh, the Chairman PAIB Committee and Council Member ICAP. He welcomed the participants and revealed the concept and objectives for the Pakistan’s first ever Finance competition. He said that the main purpose of the event was to engage finance professionals in their professional development in unique way, pit them against each other in a healthy competition and encourage them to discover their potential, exhibit their talent and celebrate their competence in a befitting manner.

The CFO and Vice President Finance of Unilever Pakistan, Mr. Ali Tariq, also addressed the gathering. He expressed pride in seeing the Olympiad being executed for a 2nd year in a row and that his dream of co-creating this first ever platform in Pakistan, to recognize and celebrate top talent, had been realized. He reinforced the strength of the Pakistani finance talent vs what he had seen and observed on his travels with Unilever.

He explained how ICAP qualified accountants who joined Unilever Pakistan had secured top roles at their London office and delighted the leadership teams. Ali Tariq thanked the ICAP and its PAIB Committee for agreeing to partner with Unilever in launching this platform and indeed for brilliantly executing the event.

The competition kicked off with a quick introduction of the teams followed by the Presentation Round which was judged by a panel of three distinguished judges; Mr. Abdul Aleem, Secretary General, Overseas Investors Chamber of Commerce & Industry; Mr. Fakir Syed Aijazuddin, FCA and Mr. Parvez Ghias, Chief Executive, Indus Motor Company Limited.

The second round was Direct Question and Answer session which was all about the agility of team and their technical knowledge. The third and most thrilling Buzzer Round started just after lunch break in which all the teams made efforts to outscore others. This was the most exciting round that kept the audience captivated. The audience supported all the teams wholeheartedly.

Once the judges evaluated the presentations, the results were announced; Gadoon Textile Mills Limited claimed victory while KPMG Taseer Hadi & Company and Central Depository Company of Pakistan Limited became the 1st and 2nd Runner Ups respectively. The winning team was awarded a majestic Champions Trophy, Mac Book and shield for each of the three team members.

The closing remarks were presented by President ICAP, Mr. Nadeem Yousuf Adil. He emphasized on the importance of the Finance professionals working in the industry and how ICAP introduces initiatives to cater them. The President congratulated the winners and showed gratitude to the organizing committee, technical partners, media partners, jury members, ICAP examinations department, Unilever Pakistan and everyone who made this event a success.

The National Finance Olympiad 2016 started off with registrations of 36 teams from renowned organizations across Pakistan. After a 3-hour intense MCQs based examination that was held simultaneously in Karachi and Lahore on November 22, 2016, six teams qualified for the Grand Finale. The top six teams were given a case study for presentation which they were to submit a day before the finale.

Unilever is one of the world’s leading suppliers of Food, Home and Personal Care products with sales in over 190 countries. We work with 174,000 colleagues around the world and generated annual sales of €49.8 billion in 2013. Over half of our company’s footprint is in the faster growing developing and emerging markets (57% in 2013). Working to create a better future every day, we help people feel good, look good and get more out of life.

Our ambition is to double the size of our business, whilst reducing our overall environmental footprint (including sourcing, consumer use and disposal) and increasing our positive social impact. We are committed to helping more than a billion people take action to improve their health and well-being, sourcing all our agricultural raw materials sustainably by 2020, and decoupling our growth from our environmental impact. Supporting our three big goals, we have defined nine commitments, underpinned by targets encompassing social, environmental and economic areas. See more on the Unilever Sustainable Living Plan at www.unilever.com/sustainable-living/.