Domestos: harnessing the power of what we do best

Ten years ago we launched the Unilever Sustainable Living Plan (USLP), a set of goals for our global business designed to help make sustainable living commonplace around the world.

Understanding the role our brands play in driving change has provided us with lessons in how to partner, pivot and navigate bumps in the road to create lasting impacts for society and for our business.

This film is about Domestos’s journey: how it went from backing World Toilet Day to creating a practical, replicable behavioural change programme reaching 28 million people with clean, safe toilets.

Something different from just germ kill

Domestos has always been recognised for its strength as a disinfectant which kills germs. In 2009 the brand wanted to push out its messaging and began backing World Toilet Day to raise awareness of the power of clean, safe toilets to save lives. “Every two minutes a child dies of diarrhoeal diseases because they don’t have access to a clean and safe toilet,” says Domestos’s Global Assistant Brand Manager, Simran Gill.

Poor sanitation is not just about the toilets. Not all communities have toilets. The practice of open defecation has been around for nearly 5,000 years. In 2012 Domestos partnered with UNICEF to use their expertise to create a programme that would achieve behavioural change at scale.

By 2013 the UN had officially recognised World Toilet Day and in 2014 the USLP set Domestos the goal of providing 25 million people with access to a clean toilet. “We were scared,” admits Domestos’s Senior Global Brand Manager, Matteo Rizzi. “We didn’t know how to get to so many people.”

Getting into something that was bigger than us

With UNICEF, the team launched the Domestos Toilet Academy to help entrepreneurs build toilets in rural India. It was resource-intensive and complex. “We started getting into something that was bigger than us,” acknowledges Matteo. “Toilet building is not something Domestos is synonymous with, we are a toilet cleaning brand,” says Simran.

By 2016 the programme’s impact was way below what they had expected. “We needed to narrow our scope – we revisited what the brand actually does – ensuring that environments are clean and safe at all times. This is our job,” Matteo says.

Understanding what role a brand has to play

One in three schools around the world do not have a toilet. Creating a programme for schools became the brand’s new focus. Domestos’s role would be to help them maintain facilities and make sure they were accessible and clean and safe for kids.

In India the government was implementing a toilet-building programme, but people did not understand how to maintain the new toilets.

The Cleaner Toilets, Brighter Futures programme stepped in to help and as a result reach began to accelerate. “Schools act as community centres,” acknowledges Simran. “They’re places where lots of learnings can be shared out to the wider community.”

Fast forward to 2019, and Domestos meets its 25 million target one year early, then exceeds it by 3 million. “It happened because we re-evaluated and repositioned our intervention and our approaches. We brought it back to understanding what role a brand has to play in this space,” Simran says.

This winning purpose ensured Domestos’s impact on our business, with the brand achieving double-digit growth in the past three to four years.

Heather McCrea, Corporate Partnerships, UNICEF is also proud of what the partnership has accomplished. “We have achieved an enormous amount,” she says. “We are excited to think about the future.”

Watch the full film here for more insight on the lessons learnt by Domestos in shaping and living its purpose. 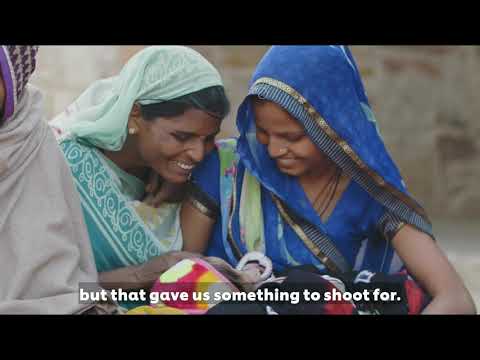 Watch: USLP
Back to top